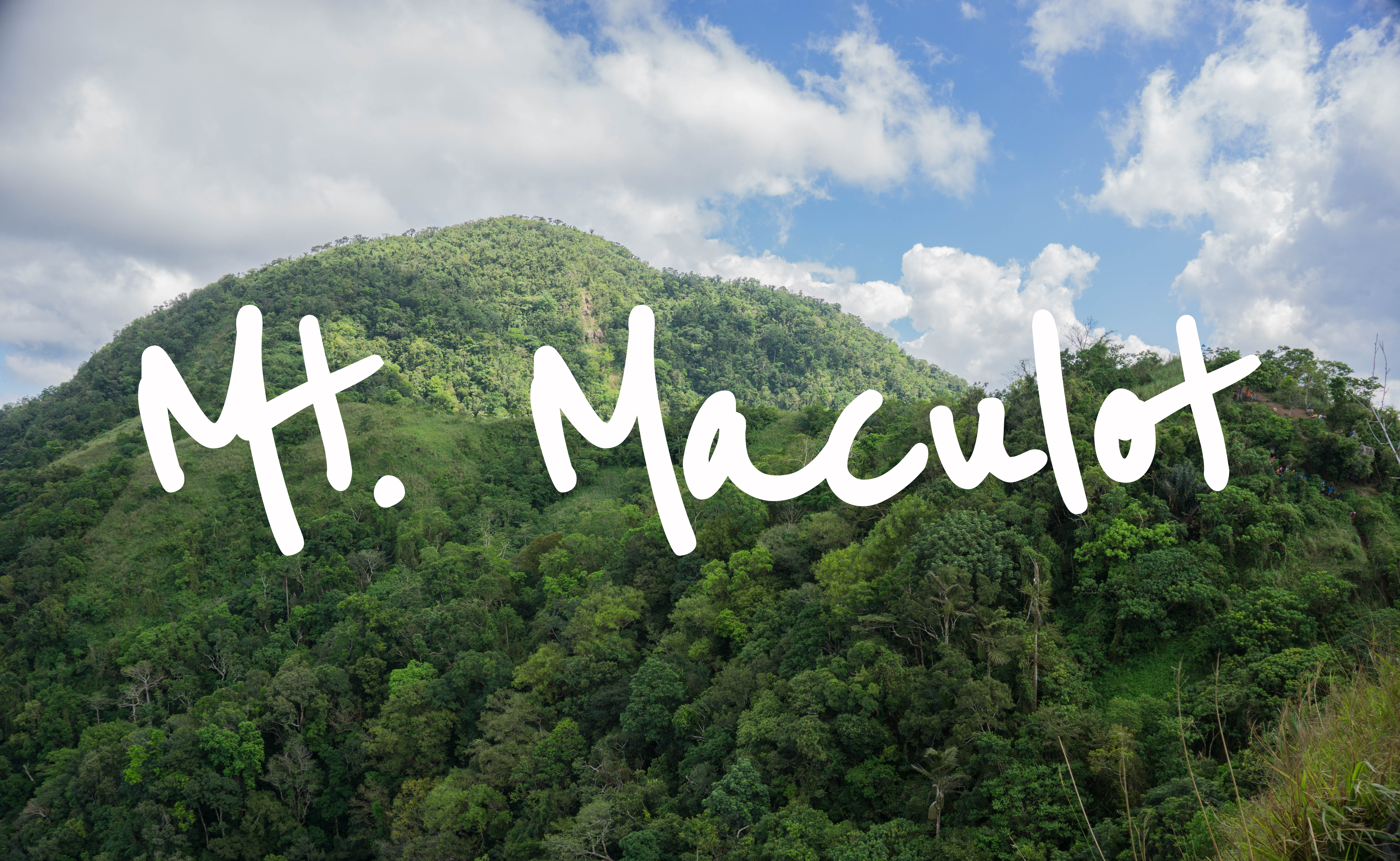 Mt. Maculot is located in Cuenca, Batangas. It is known for its “Rockies”, a place that boasts a breath-taking view of Taal Lake, Taal Volcano, and the rest of Batangas. Mt Maculot is day-hike-able. You can choose to just go to the Rockies or a full traverse going to the Grotto. Either way, it can be done in one day. The climb can be challenging since there is rappelling and rock climbing involved.

For the year 2016, I’m pushing myself to climb 4 mountains within a year. For the first climb, I invited my College Barkada and my girlfriend for a hike/outing. We haven’t been together for a long time and haven’t done it before. We always go to beaches and resorts when we go out of town. So, this time, a challenging one. 😛

We were planning to climb Mt. Batulao, but days before the climb, my contact told me that there are problems with the authorities at that time. So, I’ve searched for another mountain also located in Batangas. One of the famous hiking sites there is Mt. Maculot.

We rode a DLTB Co.Bus in Buendia, going to Lemery, Batangas. The bus fare is 130 pesos. We got down in the town of Cuenca. The trip took 2 hours. Then, we rode a tricycle at the terminal in B. Laqui Street going to the Registration office. After the registration, the tricycle dropped us at the jump-off. Tricycle Fare is 20 pesos per head.

The authorities require guides for all who will climb.  The guide fee depends on your destination. We took the Rockies-Summit-Grotto traverse for 800 pesos for 5 persons, plus 100 for an excess individual. The fee reached 1000 pesos because we are 7 in the group.

We started our trek following the road going to the base of the mountain. The climb composes of a series of assaults and the sun was starting to smile on us.

As we go higher, we can now see a part of Taal Lake. We happened to have climbed with a 70-year-old woman and her 2 Labradors. We were so amazed that she can still hike at that age. She told us that before retiring, she was just working and working. No time for vacations and that kind of activity. It was inspiring. It’s a smack on our faces— “Don’t let age hinder you from doing things you want to do” or “Do what you love before it’s too late”.

We ate our lunch at the campsite before proceeding to the Rockies.

Going to the “Rockies” is like climbing another mountain. We got down to its base, then climbed again. The trail going up was steep and we need to use our wall climbing skills.

The Rockies somewhat covers the whole view of the Taal lake. When we reached the top, we were astonished by the view in front of us.

After the Rockies, we proceeded to the summit. The trek was much easier and the sun was behind the clouds.
We reached the summit around 2:30 PM. The view was amazing! We saw Taal Lake, Taal Volcano, Tagaytay, Mt. Batulao and probably half of Batangas! 😛
We did it! 😀

The rain started to pour at the summit of Maculot. We decided to descend to avoid going down in the dark. The descent was challenging because of the wet trail. Mud has formed and the footing became slippery. Fortunately, ropes were tied on trees for us to hold on to while going down. Going down took most of our time because we were very careful. As we were nearing the Grotto, we stopped for an hour or so. The only way down is to rappel a few meters down. It can only accommodate 1 person and before us, there are other groups of hikers. We got stuck. We waited until our turn came. The reason for the long wait was because of hikers taking a lot of selfies. :l Please think of others. Always remember that the trek is not safe when it’s dark.
At last, we reached the Grotto. It was a good place to watch the sunset, but we didn’t stay long. We continued going down as the darkness came near and we only have one or two flashlights. We continued our descent on stairs and we felt our legs shaking. It was dark, the way down felt like forever. Luckily, we have our phone, we used its flash for light. After a lot of steps going down, we reached the base. Tricycles were waiting there for hikers to be picked-up. After a rigorous hike, we’ve returned to the wash area.

The hike was the first time for most of my friends and my girlfriend. I’m proud of ourselves for finishing that challenging trail. It took 9 hours. Despite exhaustion, we felt accomplished. We’ve reached the summit and got down safely, after all that we’ve been through. We don’t conquer exams and homework anymore, we now conquer mountains!

If there’s no delay, like what we’ve experienced, you can finish earlier.