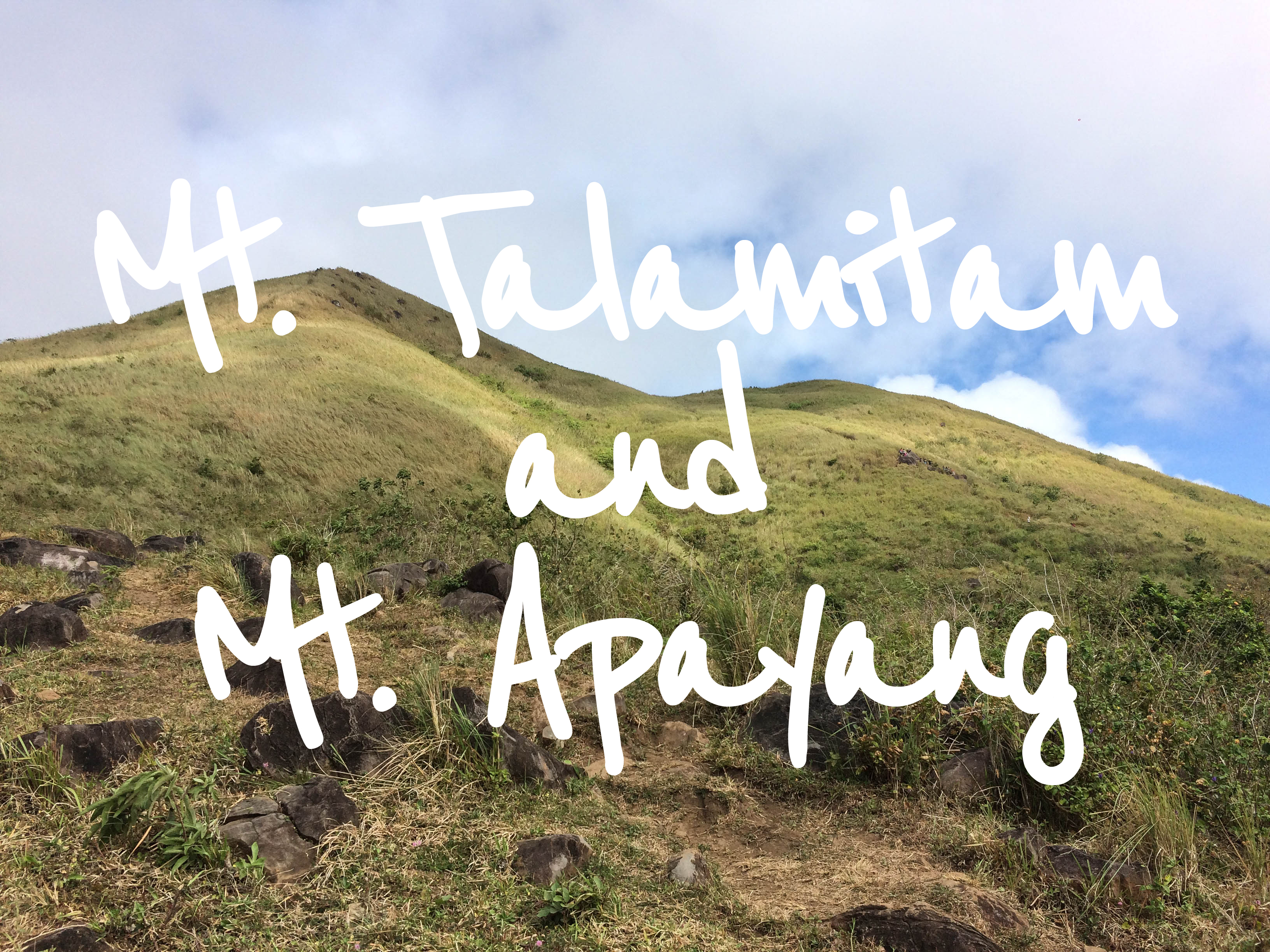 Mt. Talamitam is located in Barangay Aga, Nasugbu, Batangas near the famous Mt. Batulao. Just beside it, is Mt. Apayang. Both have easy trails and can be climbed half day.

We rode a provincial bus (DLTB Bus Co.) from Buendia Bus Terminal bound to Nasugbu, Batangas. We told the conductor to drop us at KM. 83 and he already knew that we’re climbing Mt. Talamitam. I told him to advise us once we are near the area. After 1.5 hours, we reached KM. 83 which marks Sitio Bayabasan in Barangay Aga.

For those who will bring their own vehicle, you can drive through Cavitex then straight to Emilio Aguinaldo Highway. Then, you will reach Tagaytay City. Continue passing through Tagaytay-Nasugbu Highway until you reach Sitio Bayabasan. A waiting shed will be your mark with a tarpaulin like this below.

As we got down the bus, we saw the registration area immediately. I thought that it will be located in the inner part of the local area but fortunately, it is just there along the highway. We are the ones who got there first. We paid a registration fee of 40 Pesos per person. Guides are required and it is also our first time being there, so we hired one. We were only planning to climb Mt. Talamitam but our guide told us that there is also another mountain nearby that is worth visiting. We don’t know what to expect yet so we told him that we’ll decide later.

We started our trek around 5:30 in the morning. It was still dark as we walk along a concrete road that leads to a river. We were descending until we reach the bamboo bridge. Only two persons were allowed to cross simultaneously as the bridge is not that sturdy.

Right after that bridge, we now ascended to the forested trail until reaching the vast plateau. The plateau extends up to the foot of the summit. Almost anywhere, hikers can set camp (just beware of cow dungs). From there, a different view of Batangas can be seen. I took out my camera to take shots. But, as I was clicking the shutter, an alarm popped out of the screen. “Reinsert Memory Card”. S*&#! I forgot to return the memory card back to the camera! It was disappointing but the climb must go on. I resorted back to my phone.

It was cloudy when we got there and those clouds were showing signs of rain. We ignored it at first but after a few minutes, it started to pour. Unfortunately, there are no trees to take shelter with. Luckily, it’s just a drizzle.

After the plateau, we started our assault going to the summit. The trail was steep and surrounded by Cogon grasses. Just a few meters before the summit, there are boulders that you can stand on and have dramatic shots.

We’re nearing the summit when it started to drizzle again. We rushed to see the view but luck was not with us. It was covered by the clouds. We waited until we can have a good clearing but it seems that there’s no end to the rushing of the clouds. Nonetheless, we still conquered Mt. Talamitam and the surge of the wind was also calming. We’re still wanting more so we decided to climb Mt. Apayang.

Hoping that we can see a view in Mt. Apayang, we started our trek along the ridge between them. We took a glance of the summit but clouds still linger at the top.

After 30 minutes of walking and hoping, we reached the summit and guess what, there’s still no view. Despite that, the view of clouds surrounding us is still worth appreciating.

We were told that Mt. Pico de Loro, Fortune Island, and an amazing dense forest can be seen from there. According to our guide, there were plans of opening a trail going to Pico de Loro but it is still under debate as the forest between them is too dense to have a proper trail.

There’s a caretaker at the summit and everyone is required to register. Before leaving the summit, we paid a registration fee of 20 Pesos.

After a short break, we decided to go now to the river. It was still cloudy when we descended but as we got down and closer to the plateau, the weather started to clear. The sun is starting to show and we can now see the view. We look up and saw the summit. There were no more clouds anymore. Sigh. We have thoughts of climbing again but we then decided to continue descending.

We were back to the forested trail and continued descending to the river. The trail going down is steep and rocky. We reached the river around 10:30 AM, there’s still time to take a dip before going home at noon.

We didn’t see the view at both summits, but like all climbs, it is still a memorable one. I have climbed Mt. Batulao, Maculot, Gulugod Baboy and finally this one and I can say that mountains in Batangas surely have great views. We were all amazed by the sight of Batangas from atop.