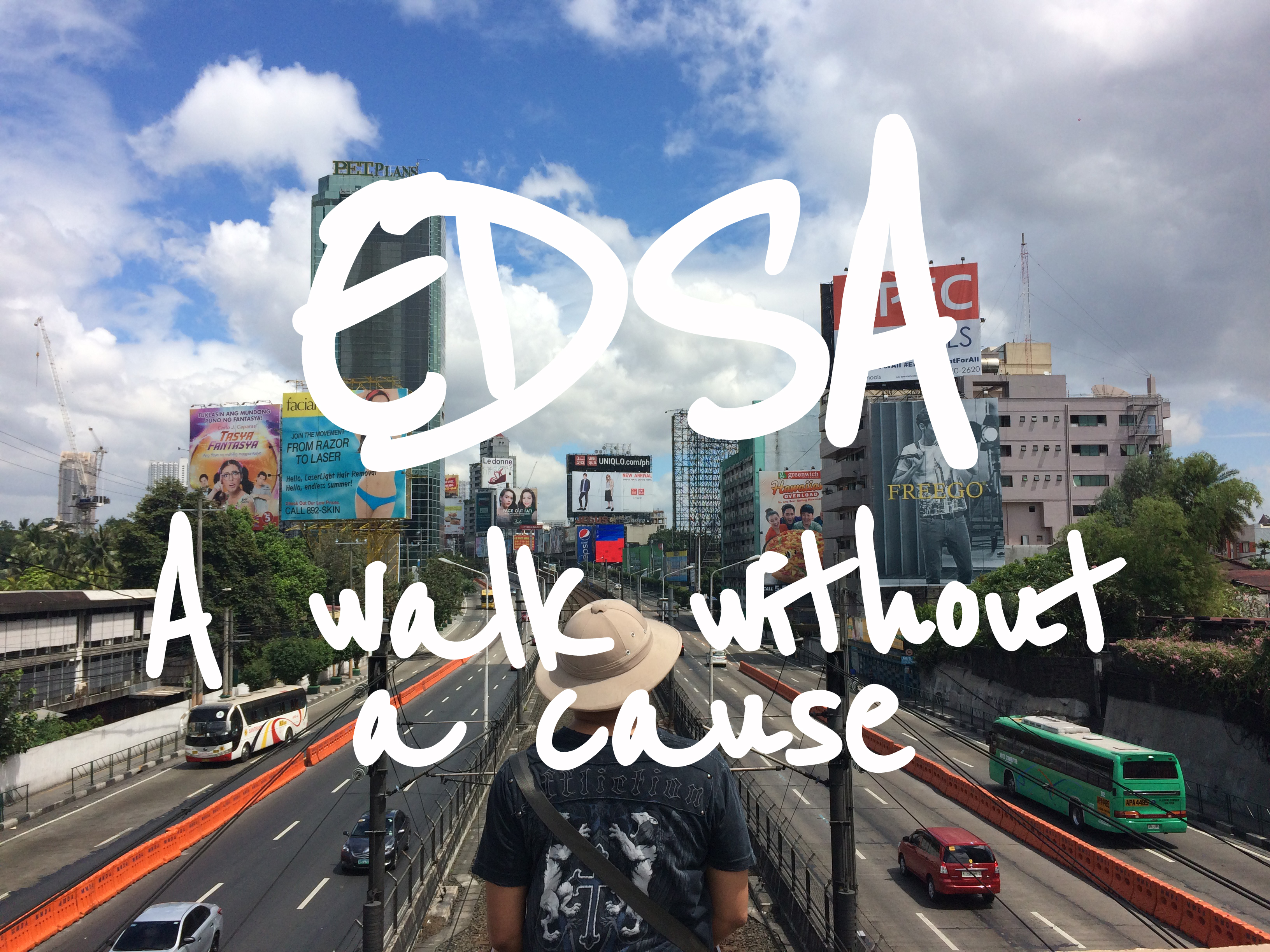 EDSA: A Walk Without A Cause

EDSA… the symbol of traffic in Metro Manila. The major road going to most cities in the Metro, where most Filipinos pass to go to work and go back home. They say there is forever in EDSA as trips going to your desired places take 2-4 hours. What a waste of time! Spending most of our lives being stuck in traffic. But despite this, EDSA has been a part of positive change and victory for most Filipinos.

When I was young, my father and I used to take long walks from our house to different places, kilometers away from our area–to Tandang Sora public market, Mindanao Avenue, SM North EDSA, and Munoz Public Market. These are 3km to 7km away. I enjoyed that a lot because we will eat outside after that walk. 😛

One day, out of nothing, my father invited me to walk along EDSA. It surprised me but was open to the idea. EDSA is almost 24km long. It’s a major road so vehicles are always there. The problem is not just the distance but the pollution we can inhale from the cars. Despite that, we still continued. We jokingly called our walk, A Walk Without A Cause. Simply, we walk for nothing, Trip-trip lang.

Our goal is to start at Monumento in Caloocan and end at SM Mall of Asia in Pasay City. We brought our cameras to capture all that we can see as we walk. Hopefully, no one will steal it. :p

We started late at around 8 AM. Cameras ready, caps on, and legs pumped up, we were ready to go!

As we walked, we observed a lot. From disobeying motorists to the homeless, inefficient government projects, graffiti, culture, and progress. From there, we saw a more vivid view of the current situation in the Philippines.

We’ve encountered different people along the way. Most people kept a close look at us, wondering what are we doing holding a camera in dangerous places. Luckily, our cameras are still with us. Some had a picture with us. A total stranger, just got curious about what we were doing, since we dressed differently and took photos in an unusual place.

After 15 Km, we can feel our feet and legs sore. We were very tired and hungry, so we call it a day and planned to continue our walk some other time. We ended our first walk at EDSA Shrine in Ortigas Avenue, more than half of our target. It’s a good sign, we happened to reach the half, so reaching the other half is not a problem.

My father decided to continue our walk on the anniversary of EDSA Revolution. Some parts of EDSA will be closed due to the People Power Anniversary Celebration. For those of you who don’t know EDSA Revolution,  it is a nonviolent uprising by the Filipinos against the Marcos Administration. Filipinos gathered and marched through EDSA to protest and stand together against a Dictatorship.

We started our second walk at Santolan-Annapolis MRT Station, a few kilometers from our last stop (EDSA Shrine). EDSA is closed, it was a sight for sore eyes. No cars, pollution, and traffic! We have the liberty to walk in the middle of it. When we reached the monument, yellow confetti started to fall. Sadly, there are not many people in the event to commemorate that memorable event. After the fall of the confetti, vehicles are now allowed to pass through so we’re back on the sidewalk.

Same with our first walk, there’s a lot to see. Negative and positive aspects. One that broke my heart, is that we saw kids using contact cement to satisfy their addiction. Another, even the richest cities still have beggars. On the other side, we can see that our economy is growing. Yes, it is growing, building after building is being constructed. According to my father, a lot has changed. Constructions are everywhere. From empty lots, they are converted into high-rise buildings. Cars are multiplying and people are progressing as there are now more jobs today than in the past. Unfortunately, the infrastructures were left behind and still, there are many who still live in poverty. If the government manages to change and improve its work, the Philippines will surely be a Tiger in Asia. People leaving in poverty will be reduced and we’ll live a more comfortable life.

After 8 hours of walking under the heat of the sun and surrounded by smoke, we can now see the globe in front of Mall Of Asia. We can finally take a rest. We took a jump shot of each to celebrate our achievement.

As we are reaching the end of our walk, my father told me that our country is on the road to progress. Most of us are frustrated by the rampant corruption in our government and lose hope. Yes, we should be infuriated but never lose hope. We’ve been better than before and we believe that we will be better in the future. We should hope and believe that our unfortunate past will be left behind and a better future will arise. We just need to be patient and act righteously, for change is not easy. Last and the most important, is to love our country. No one will help our nation but us Filipinos only. Let’s do our part–refuse corruption, obey the law, and be a solution to our national problems.

For some, we’re crazy for doing such a thing, but I believe doing crazy means more. Great things come from crazy ideas. The pictures we took will someday be a part of history and a part of every Filipino. A reminder that we’ve been like this before, but now, WE ARE DIFFERENT. WE ARE BETTER. AND WE WILL BE GREATER.

Check out also my Father’s blog about EDSA.