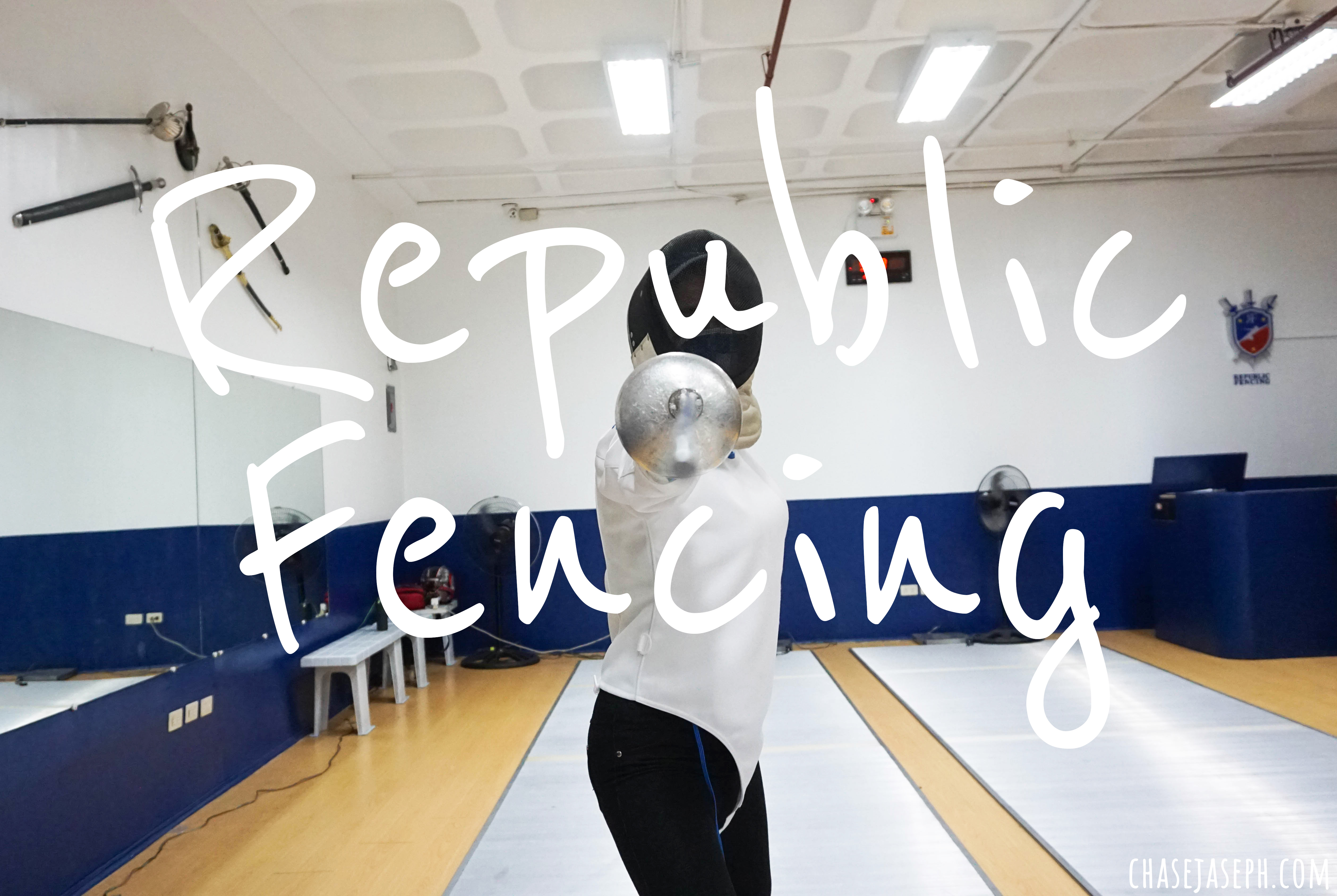 There was a time when I desired to do fencing—to train and compete in official tournaments. I was enticed of the quick movements, piercing and especially, holding a sword. I researched the basics — the weapons, the stances, and the techniques. Even downloaded videos of Olympic matches to see the moves and imitated them as if I’m already training for a competition.

But, all of these were put into waste. There was no fencing varsity in my college and joining a club was difficult for me, as it was expensive to enroll in classes and to own gears. I gave up and forgotten all of it.

But one day, destiny made a way for me and fencing to face each other again. I’ve visited a mall in Makati called Makati Square. Wanting to pass time, I explored the mall and upon reaching the basement, Angelic voices started to sing while I stared at these people wearing white suits and holding swords. Just kidding. XD I saw their logo which states Republic Fencing, I got thrilled and quickly asked for their rates. And to no surprise, it was still expensive. At that time, funds were short but I told myself that I will try it someday. To cross it out off my bucket list.

Republic Fencing is a fencing gym open for men and women, ages 6 years old and above. They have the pieces of equipment needed for everyone to learn and master fencing — from the weapons, protective clothing, electric equipment (for scoring) to the playing area called Piste. They also have professional coaches that teach and guide aspiring fencers.

Months went by, I invited my girlfriend to experience it. We tried the trial session package which includes a 1-hour trial session with free use of equipment.

There are 3 parts that are included in the trial session:

Before anything else, we were required to jog around the gym and do warm-up exercises. Fencing is a full body workout, so it’s very important to stretch those muscles and joints.

The first part was teaching the basics. The different weapons used and target areas that are needed to hit in order to get points. There are three weapons namely, the Foil, the Épée, and the Sabre. Our coach, Coach Luis, made us focus on Épée, as it is the most realistic since you are allowed to hit all parts of the body.

The second was the stances, footwork, and attacks. He taught us “En Garde” and “Lunge”. En garde is the stance where each player is in the ready position or simply to be on guard. Lunge is an attack wherein a fencer thrusts his body while aiming his/her sword at the opponent. This was where the exercises helped, we bent and moved a lot which made our legs sore. Before starting the last part, our coach gave us time to familiarize ourselves with these.

The last one was the most exciting part — the actual fight. But since my girlfriend is my opponent, I controlled my self from hitting her hard (Partida, Ehem XD). We wore jackets and for her, an additional chest protector. Before wearing our masks, we saluted each other. At the signal of our coach, “Pret… Allez!”, we tried and focused on hitting each other as if we’re enemies. By the way, the weapons have buttons at their tip in which when they hit the target, it will record and display the score on the scoreboard. At the end, I lost to her, 8-5. I’m a good boyfriend, right? XD

Fencing had been one of my dreams that did not go into reality. A dream that was let go by my old self. Experiencing this made me done another ChaseJase and it really felt amazing. It felt like I retrieved another lost part of me.

I hope that this trial session will not be the end of my fencing experience. I can see this as my way of working out in the future as long as my funds agree. If you’re open for donations, you’re most welcome! haha! Just Kidding. Hope you can try fencing as well, it’s fun and I’m sure that it will challenge your physical and mental strengths. If you already tried fencing before, share your experiences with me in the comment section. En Garde!