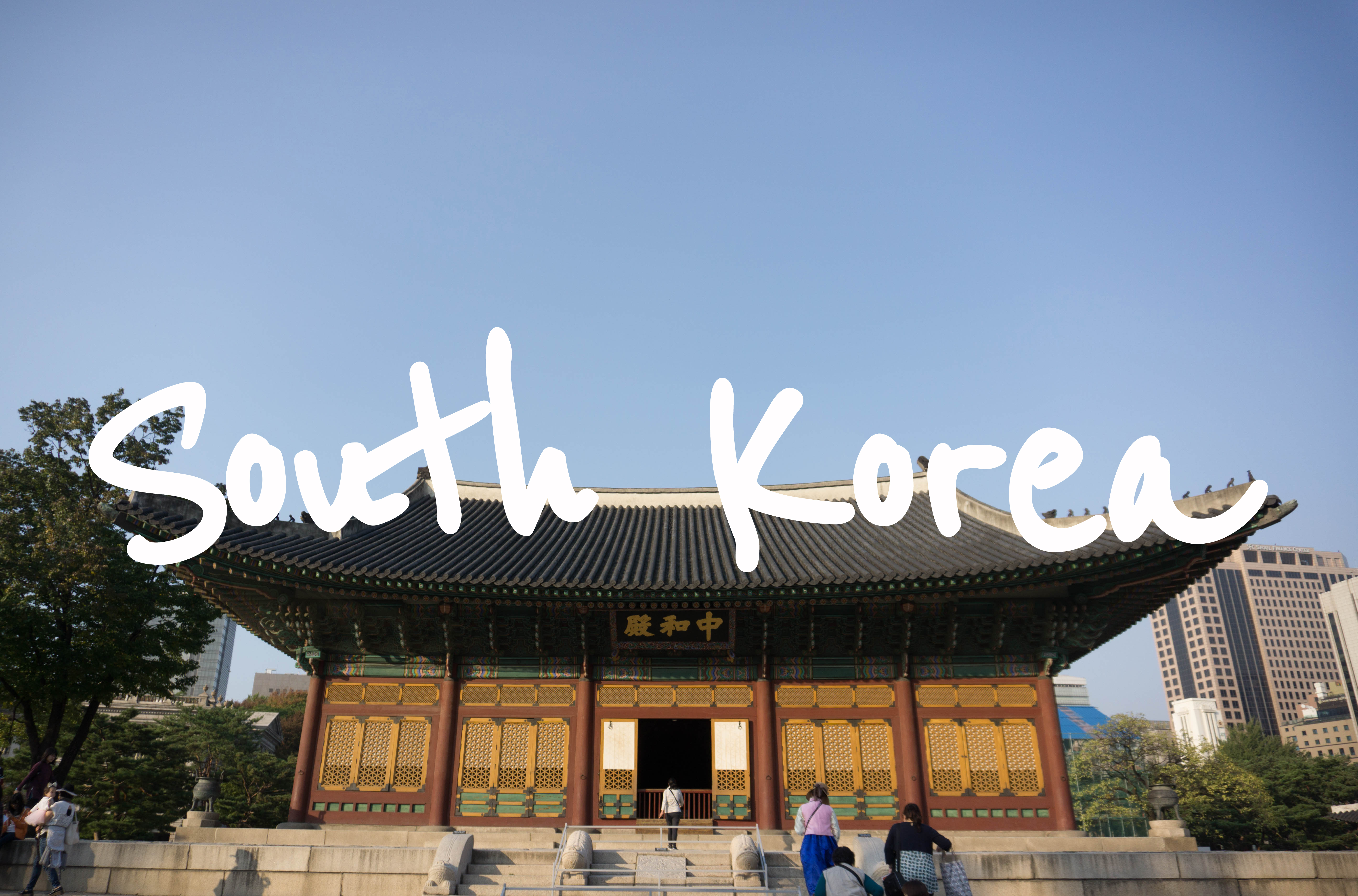 There was a time when I was a fan of anything Korean, from listening to K-Pop to watching K-Drama. I was fascinated by how creative their music videos were, how cool their dances were, how addicting their beats and even how cute their movies were. I was drawn within the Korean wave and as a result, I dreamt of going there someday and exploring South Korea.

Fortunately, my cousins planned to go there and invited me to join them. I was hesitant at first because it will cost me a lot of money and back then, I was very tight on spending money. I have this mindset of saving first before splurging. But I was tired of being like this, so I said, Yes.

Months before our trip, I save as much as I can. Luckily, we’ve got our Korean Visas for free. We submitted the requirements and waited until it will be released.

Days becoming near and I was very excited. I packed my clothes and camera in just one bag to minimize loads.

My cousin, Glenn, made our itinerary, so I and the others had no problem thinking about where to go and how to go to the tourist spots and our accommodations.

Our first destination was Jeju Island. An island located in the southern part of South Korea. There was no direct flight to Jeju. From Seoul, we transferred to another flight, which was Jeju Air. We’ve spent 3 days there before going back to Seoul.

There are a lot of places to see in Jeju especially when you’re a nature lover. There are waterfalls, caves, mountains, and grass fields. The island is huge so it is recommended to rent a car for easy access.

Seongsan Ilchulbong Peak, also known as the Sunrise Peak is a land mass that resembles a fortress. I have never seen a land formation like this, it was like being in a different world. It is recommended to see the sunrise at the peak, but we weren’t able to see it because we prioritized breakfast. :p Stairs were constructed to ease the climb going to the top. The view up there was amazing.

Jeju Folk Village Museum is a life-size diorama of different villages that existed in Korea in the 1890s. If you want to learn the customs of the Koreans, this is the place. From traditional houses to tools, Jeju Folk village enlightened us about the ways of the old times. We paid 10,000 Won for the Entrance Fee.

Manjanggul Cave is the longest lava tube in the world. This was our last destination for our first day. It is huge inside. The cave was developed for easy access. No crawling and climbing needed until the end. No need to worry if you’re afraid of the dark, there are lights built to guide tourists, which we had fun using while taking pictures. We paid 2000 Won for the Entrance Fee.

Daheeyeon Garden is one of the major tea farms in Jeju Island. We saw a vast field of green tea plants. Daheeyeon Garden also has an underground cafe that offers freshly harvested tea drinks straight from the farm. There is also a museum/store that showcases different tea utensils and teas to purchase.

Sangumburi crater is a crater of an extinct volcano. The crater and the surrounding area are rich in plant life. One of the prominent is the Eulalia Plants which surround the paved pathways around the crater. Mt. Halla-san, the highest peak in Jeju, can be seen here. The entrance fee is 6,000 Won for Adults.

Jeongbang Falls is a waterfall that falls directly into the ocean. How cool is that? 🙂 It is majestic! As we walk near the falls, I felt the mist as it touches my skin. It’s like being blessed with holy water. It was one of the highlights of our Jeju trip. The entrance fee is 2,000 Won for Adults.

After Joengbang Falls, we visited Cheonjiyeon Falls. The trail going to the falls was paved for easy access. Souvenir shops and parks are can be seen in the area. Its deep waters are known as a habitat for Mutae eels. The entrance fee is 2,000 Won for adults.

Before going to our next accommodation, we visited Jeju Loveland. It is a sculpture park, with a theme of sex. From phallic statues to sculptures doing sex. It is a very different park, unique and funny at the same time. But still, we considered it as art and acted like grown-up boys. :p Entrance fee for the park is 9,000 Won and be sure to be an adult. 😀

After our nature adventure in Jeju, we returned back to Seoul. It made me very excited as I will now see the places I’ve just seen on videos and try some authentic Korean foods. Before our first destination, we visited the agency where we ordered our tickets for Everland. As we are going to our first destination, we passed by food vendors where they sell Kimbap, Gamja Hotdogs, and Walnut Cakes. Yummy!

For our first destination in Seoul, we visited Deoksugung Palace at the heart of Seoul. We were in time for the changing of guards held at the gate of the palace. The palace is owned by the kings of the Joseon Dynasty. The complex is huge and it also houses the National Museum of Modern and Contemporary Art. The entrance fee is 1,000 Won.

The famous tower in Seoul and the one I’ve always seen in K-dramas and K-pop music videos. It stood at the top of Namsam Mountain and it offers a panoramic view of Seoul. We paid 33,000 won for 2 tickets plus 1 popcorn and 2 beers. We chilled at the top, enjoyed the view, and drank our beers. It is also the place of the famous couple’s locks.

For our second day, we spent the whole day in Everland. A theme park located outside of Seoul. We paid 52,000 Won for the ticket.  We rode a bus from Gangnam going to the park’s pick-up point. I’m not a fan of theme parks because I get easily dizzy when on rides, but I really appreciated the place. It’s very alive and diverse. Our main objective is to ride the T-express, the first wooden roller coaster in South Korea and one of the steepest. I felt nervous and excited at the same time. The descending point was very steep. In the end, we were able to surpass our fears and make it alive. 😛

From Everland, we returned back to Gangnam to have our dinner. One of the famous districts in Seoul, Gangnam, boasts its status of high standards of living and wealth. This is Seoul’s prime area for the rich and the famous. Entertainment companies of K-pop idols are also located here, such as SM Entertainment, JYP Entertainment, and LOEN Entertainment. Sadly, we just spent a little time exploring the area and we haven’t seen these companies or any K-pop stars. But, just seeing its bustling streets made it fun for us to discover its vibrant community.

On our last day, we visited Nami Island in Gangwon-do. It is a half-moon-shaped Island that resulted from the construction of Cheongpyeong Dam. This is the place where known Korean Dramas were shot, like Winter Sonata. We traveled for more than an hour to get here by train and by bus. The tickets represent as Visas, that we as a visitor of different nations will be a citizen of the Republic of Naminara. Nami Island is a nature park, where families, friends, and tourists will be relaxed and be one with nature. The place is very picturesque because of the different colors of the leaves. This is my first time experiencing Autumn and it was unforgettable.

Myeondong is one of the shopping districts in Seoul. From clothes, and foods to beauty products. I’m not into shopping, but what I enjoyed most were the different street foods present there. Street foods like crepes, Gyerang Bbang and Donkas. I was surprised by the abundance of stores of Tonymoly, Innisfree, The Face Shop, and many more. There’s one at every corner. XD

Our SK trip ended so soon. 5-6 days were not enough to experience a country that is at the top of my list. There are a lot of places that we’ve missed that I really wanted to visit. Places like the Bukchon Hanok Village and Gwanghwamun Gate. But, all in all, it was a wonderful experience. I’ve learned many things, from traditions to culture. I was amazed at how a war-torn country was able to bring itself up in becoming a highly industrialized country. It was not a problem for them because they are very innovative, creative, and disciplined. There were a lot of things, that I’ve seen and experienced there, that changed my perspective. Hopefully, I can visit South Korea again someday to see its beauty and experience it more and better.